Military fitness: is it for you?

I know, I know. Darryl has gone completely off the deep end this year with all of his workout recommendations. Deadlifts, maximum strength testing and now 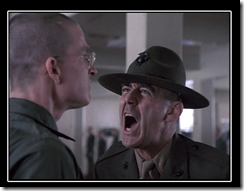 MILITARY style workouts? Isn’t this all a bit much?

The military is very black and white in its approach to the world. It has to be since there are only two types of soldiers, sailors and marines: live ones and dead ones. That may be a harsh statement, but it reflects the harsh reality of serving in our Armed Forces. Thus, they have an incentive to find methods and techniques that actually work instead of being just the hot “new thing” in the industry.

Also, think about the typical person who joins the military. They typically are in their early twenties, but one of the fastest rising demographic groups is the over 35 crowd. They also are not typically Olympic athletes who just have nothing else to do. They are our sons, daughters, friends, neighbors and co-workers. In other words, they are average Americans, just like you and me.

So, the military has spent decades on creating and testing physical fitness routines that give tangible results, use minimal equipment and can be easily understood by the average Joe.

Sounds like they know what they are talking about, and they have designed it just for you. Since you are paying for it with your tax dollars, you might as well take a look.